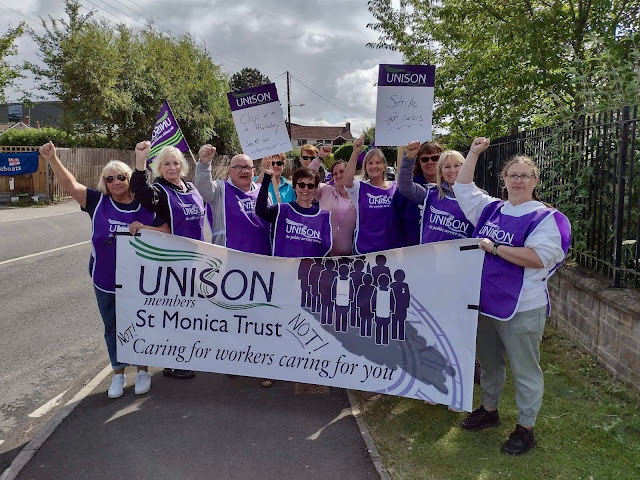 Care workers, registered nurses and residential home staff employed by Bristol-based St Monica Trust will take further strike action next week, said UNISON.Staff at the Russets and Sherwood care home in Sandford, North Somerset, will walk out for 48 hours from 7am on Tuesday 16 August, while workers at Cote Lane in Bristol will launch a two-day strike from Friday 19 August.The new dates follow five days of action in June and July over fire and rehire threats and cuts to pay.Weekend rates will be slashed for senior care workers by 21% under the plans, while other staff are being asked to take a 10% hit to their salaries, UNISON says.The union says striking staff also face a 50% cut to sick pay and reductions in working hours after bosses imposed unpaid breaks during shifts.Several health and safety concerns have been raised by UNISON with St Monica Trust. These include the recruitment of agency staff who will not be familiar with the specialist needs of residents.Issues raised by staff at other homes run by the Trust include trainee nursing associates being used in place of qualified nurses, and residents left without hot water for a week.UNISON South West regional secretary Joanne Kaye said: “St Monica Trust has been asked repeatedly by UNISON to meet for talks but the charity simply refuses. It’s been over four months since they came to the table.“Many staff don’t know if they’ll be able to feed their families as the cost-of-living crisis bites. Slashing wages and threatening employees is not the way to keep experienced, committed workers.“Throwing cash at agency staff who do not know the ropes or the residents is a dangerous tactic.St Monica Trust must put residents and staff before balance sheets.”

Notes to editors: – Care staff employed by St Monica Trust took part in five days of strike action and staged pickets outside care homes in June and July across South Gloucestershire, North Somerset, and Bath and North East Somerset. The action took place on 29 June and 2, 5, 10 and 11 July.– Proposals from St Monica Trust include cuts to hourly rate, cuts to sickness absence pay and cuts to working hours. – UNISON is the UK’s largest union with more than 1.3 million members providing public services in education, local government, the NHS, police service and energy. They are employed in the public, voluntary and private sectors.